2012 My Favorite Vintage Ever In Oregon

For those of you who know me, I still stand by my opinion that 2012 was the perfect Oregon Pinot Noir Vintage in my lifetime. The weather conditions were just perfect. To be honest, after tasting so many they all tasted the same . One was as delicious as the next. When I worked at the Brazilian Steakhouse in 2 markets out of 4,  I was able to get an exclusive on 2012 Boedecker Cellars YC Cuvee Pinot Noir. This particular blog entry is not about them (I praise their wines enough that people will start to think we are related ) Those letters YC stand for the Yamhill=Carlton region which made my palate very aware of the huge difference that terroir had from any other Oregon 2012 Pinot Noir that I had tasted.

The Horseshoe Of Oregon Yamhill-Carlton A.V.A

The Yamhill-Carlton District AVA is an American Viticultual Area  located in both Washington County and Yamhill County, Oregon. It is entirely contained within the Willamette (That’s Willamette Damn it..Not WILLIAM ETTE) Vally AVA.  and surrounds the towns of Carlton and Yamhill  The mountain ridges surrounding the district form a Horseshoe shape, and most of the vineyards are located on south-facing slopes. The AVA includes only land between 200 feet (61 m) and 1,000 feet (305 m) ABOVE SEA LEVEL where Marine Sediments  and some if not the OLDEST SOIL in the Willamette Valley are. That’s the uniqueness of this area that makes the wines taste so different. 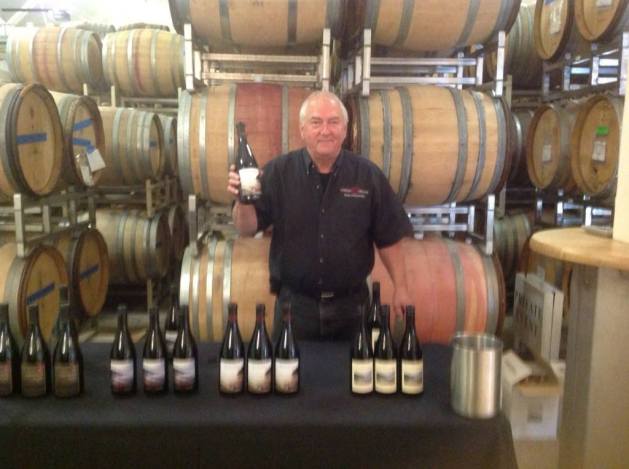 Originally from Pennsylvania (Pinot Noir Growers And Winery Owners All Have a Story as It Is A True Labor Of Love Once The Oregon Bug Bites Them And They Change Careers) Dave is a hands-on kind of guy who brings a former engineer’s attention to detail to bear on everything he does, from vinification to pruning methodologies (Interesting to note that the above mentioned Stewart Boedecker of Boedecker Cellars in Oregon was also a former engineer with attention to detail for INTEL )  His direct personal involvement in every aspect of Carlton Cellars is clear when you visit for a tasting. He’ll tell you the story of your glass of wine, the angle of the sun on that block of triple-7, how much fruit was dropped to achieve the concentrated flavors, and where in France the oak for the barrel made came from. The famous Carlton Winemaker’s Studio where Boedecker and so many others used to make wine when they didn’t have an actual winery of their own is located right in the town of Carlton where Dave’s Carlton Cellars is which he now rents some space to up and coming winemakers with a dream to fulfill as well. 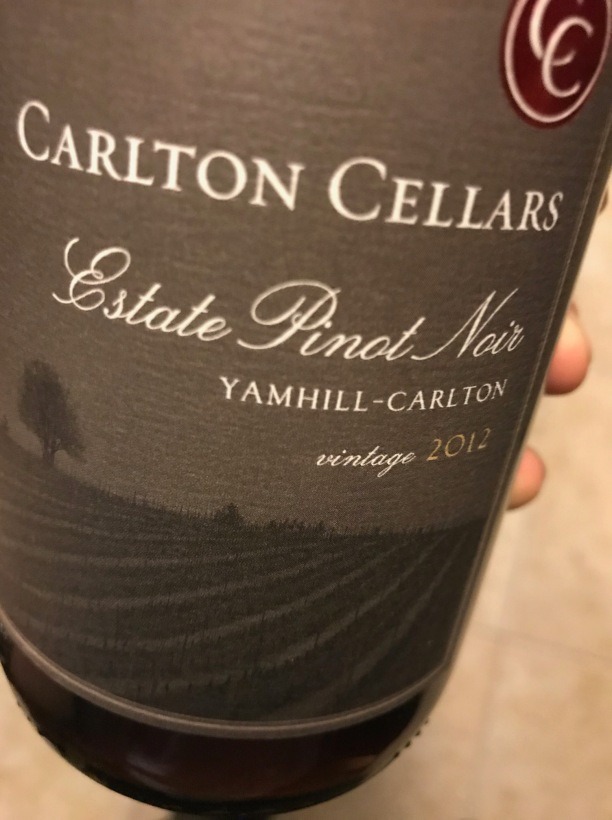 There aren’t too many 2012’s floating around so for my holiday I thought I’d nab one of the few bottles left of my favorite vintage from my favorite Terroir and OLD SOIL in Oregon the Yamhill-Carlton A.V.A.  Everything I read from reviewers like Wine Enthusiast or other publications KNOCKED it with an average rating because it wasn’t a 2012 Fruit Bomb. It’s almost as if their words like “Even the really nice red fruits couldn’t mask the streak of Earthiness in this wine” was a NEGATIVE?  No one GETS It… That’s music to my ears but not to the average Pinot Noir Consumer even from Oregon. What I love about Oregon so much is 1- Vintage and Terroir Matters 2- The winemaker’s have passion and attention to detail and most important to me 3- They have those Earthy Tones of Burgundy which is what I want in a Pinot Noir that this Old Soil always delivers …and not Sugary tasting wines exploding with just fruit.

The Review And Tasting Notes

When tasting Oregon Pinot Noir, for me it’s time to bring out the Oregon Pinot Noir Glass designed by Riedel Stemware in conjunction with the Yamhill Valley Winemaker’s Association. Oregon Pinots in this $40 Glass really do taste different than in any other glass. It is designed to taste one grape and from one region only…Oregon.

Like other Yamhill-Carlton Pinots it was a nice dark garnet red in the glass with a brownish tinge to the edge from that old soil. I must admit that even with 1 hour of breathing time and the special glass this wine is tightly wound and it didn’t start giving up anything much until about 2.5 hours. Aromas of Chambord , black cherry and red fruits pop from the glass and you can get some vanilla and spicy nuances from the 10 months in 100% French Oak. On a very light to medium frame, it was intense cranberry, rhubarb and red fruits like cherries with that Yamhill=Carlton, earthy, pebbles and brambles weaving all throughout the entire sipping process. It ends with a long, spicy finish and you can taste the attention to detail that Dave and his Cellarmaster Steve Ryan gave this wine. My breath tastes mushroomy and tart at the end. The only one negative about this wine.. it is a little less complex and less layered than I personally would like but what a great food Pinot and a totally different expression than other 2012’s I have tasted from other areas in Oregon. Because of this slight lack of dimension  and layers I am scoring this 88 out of 100.

This isn’t cheap. It’s a $32.99 American Pinot Noir. It’s also not a mainstream flavor profile. It is 100% Burgundian in style and only 1200 cases produced and few floating around at our ABC Fine Wine and Spirits Stores in Florida. If you are the type that expects Pinot Noir to taste like a Fruit Pie or a giant fruity explosion of Silky Smoothness, this is not your wine. If however you always wanted to taste a Red Burgundy and you have avoided like me because of the $55-$85.00 price point (And that is recent vintage stuff not older vintages) at $32.99 with a Grilled Filet with Bernaise Sauce, Fatty Cedar Plank or Alderwood Salmon, Grilled Portobellos or Eggplant this wine will deliver the Wine Of A Kind Experience for you at a lesser cost than Burgundy. I was happy to re visit my favorite vintage. I certainly hope I   will be repaying another visit in the very near future.