Skip to content
Don’t Panic It’s Organic. I have said over and over before that these wines from Jumilla 3000 feet above sea level in Spain produce some of the best wine values for everyday wine and the loamy slate rocky soils produce vibrant flavors mostly from the grape Monastrell where in France they call it Mourvèdre. Honoro Vera is produced by Bodegas Ateca and 100% organic Monastrell and Vegan (No egg whites or fish bladder used for fining ) $8.99 retail and the 2018 has a beautiful inky purple hue with aromas of blueberry pie , cherries and violets. On the palate very vibrant with bright fruit forward flavors or red currants, boysenberry hints of spice and slightest bit of toasted oak (only sees 2 months of oak) and silky tannins. Why are you buying $20 bottles again ? . . . #jumilla #monastrell #catalyud #spanishwine #bodegasatecahonorovera #valuewine #sommelier #winebythecase #manchegocheese #winelifestyle #missmyjob #illbebacksoon #wineofakindexperience
Follow Larry The Wine Guy on WordPress.com
Posted on January 3, 2018January 3, 2018 by Larry The Wine Guy

What The Heck is a Cru Bourgeois??

It really is no wonder that most wine consumers stay clear of the French Wine sections on Restaurant Wine Lists or in Wine Retail Stores. I am a Certified Level 2 Sommelier and the French especially, change their classification systems more frequently than I change my socks, and it gets me a little confused too!! Let’s try to make this new addition to your Bordeaux knowledge you have or don’t have, a little more down to “earth” or should I say TERROIR?? In Bordeaux 1855 there was a classification document drawn up where certain Chateau’s or Vineyards were classified. All that means these classified CRUS (Vineyards or Growing Areas) were supposedly better than other wines coming from Bordeaux that weren’t from Classified Growths and just labeled Bordeaux. For example, Chateau Lafite Rothschild and Chateau Latour are Classified 1st Growth Bordeauxs. They are also to the average consumer in America .Classified No Growth Bordeauxs. as far as your savings account was concerned.  There were a lot of vineyards or Chateaus on the Left Bank of Bordeaux that didn’t make the grade and weren’t classified. Soooo, in 1932 they created a new classification for these supposed better Crus (Vineyards or Chateaus ) and gave them the title of CRU BOURGEOIS (CREW– BURZH–WAHH). I have no problem with that however, The original 1932 Crus Bourgeois classification was revised in 1966, 1978, 2003, 2008 and 2015. The most recent changes shook up the Crus Bourgeois classification, bringing about major changes and an upheaval among some its most important members. Clearly, the 1932 classification was not exactly set in stone, unlike the famous original 1855 Classification Act mentioned above. Those new changes also no longer were classifying the Chateau or Vineyard they were classifying the ACTUAL WINE. That means, much like the Academy Awards for Film, just because one year you made the Cru Bourgeois list doesn’t mean the next year you would. You had to submit your WINE to be judged and either you made the cut or didn’t. The latest changes will be with the 2018 Vintage and will be released in 2020 as there will be 3 different tiers of Cru Bourgeois,,,,,,,and OK ENOUGH IS ENOUGH. In plain understandable English.. just know that a Cru Bourgeois is 99% going to provide you almost as good if not better in some instances a better drinking, quality wine than a non classified wine or in some instances better than a Classified Growth…FOR A HECK OF A LOT LESS MONEY. Those last words are ALL YOU NEED TO KNOW about Cru Bourgeiois. Better Wine, Better Value. 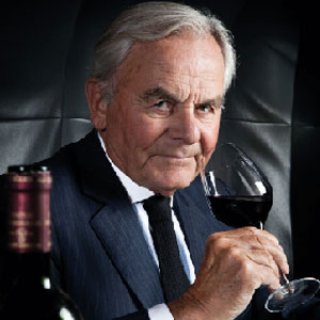 I see this face in my line of work 20-30 times per week. He is famous for being the sole proprietor of 4 famous Grand Cru Classe properties in Bordeaux most notable Chateau Pape Clement. He is also very well known these days for owning a bunch of other properties in Bordeaux including Cru Bourgeois , South of France like Provence,as well as owning properties making wine in Spain, Argentina, Uruguay. This guy gets around. 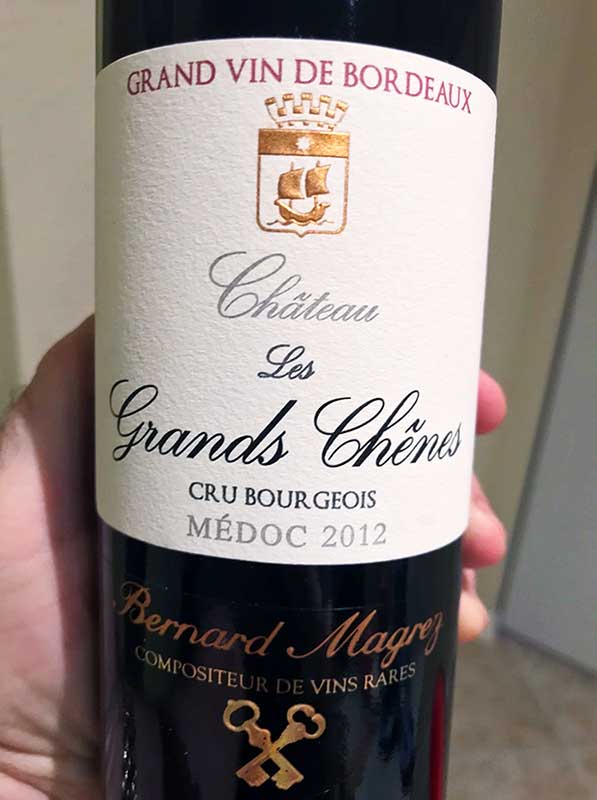 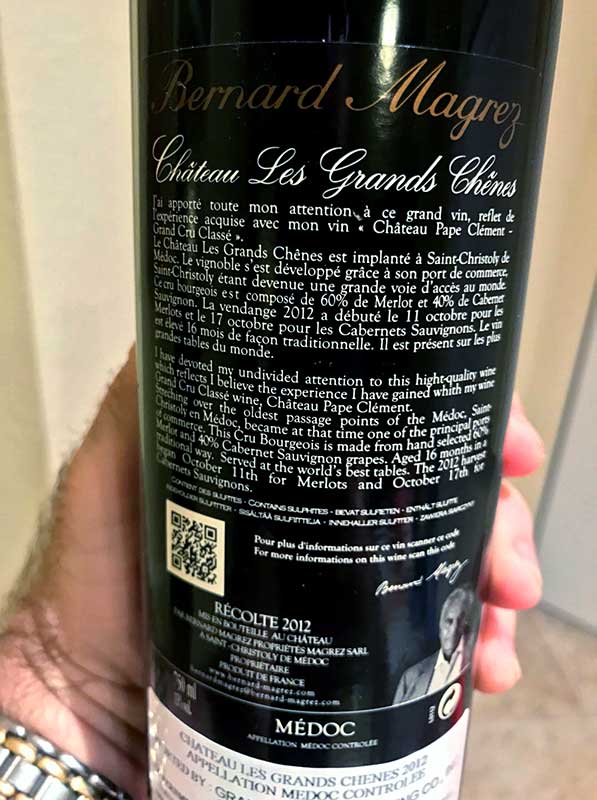 25% of all Bordeaux coming from Medoc are classified as Cru Bourgeois. As you can see Monsieur Magrez’s face is on the back of the bottle. Back in 1932 most Cru Bourgeois wines were like all Left Bank Bordeaux, Cabernet Sauvignon dominant. That has changed over the years to make the wines more approachable with less aging than most expensive Classified Growths or Grand Cru Classe, Merlot is being used in a much higher percentage. Although the back of this label says 60% Merlot and 40% Cabernet, I have double checked with the Supplier and this vintage is 70% Merlot, 29% Cabernet Sauvignon and 1% Cabernet Franc. 2012 as many experts would say not one of the best performing years for Cru Bourgeois Wines but Les Grand Chenes over delivers almost every single vintage. Aged 16 months in French Oak.  If it were the prime vintages of 2009, 2014 for example, the same wine would be instead of 2012 pricing of $21.99 upwards towards $40 per bottle. So lets take this Cru Bourgeois out for a test drive 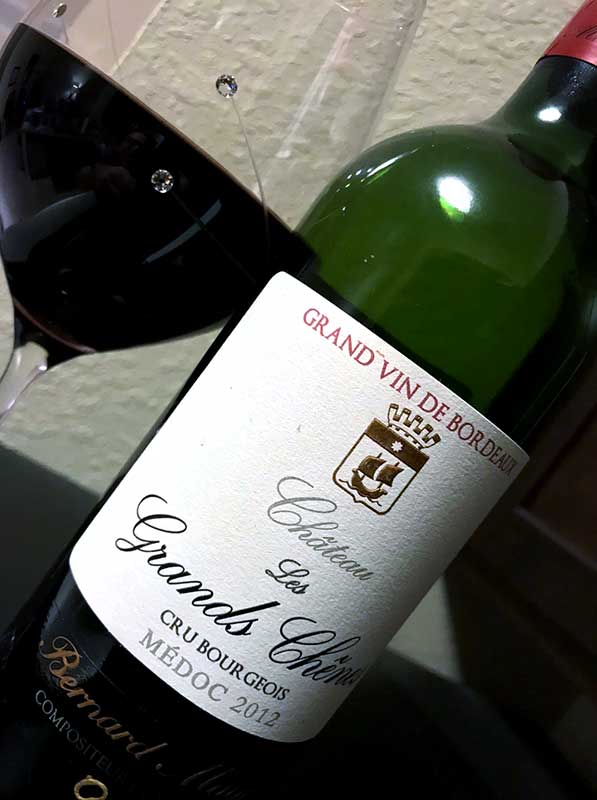 First of all, if we are going to act fancy schmancy and drink a Cru Bourgeois (Since no one but your Sommelier has to know it only cost you $21.99 not $121.99) you may want to spring for some good Bordeaux Crystal Glassware. I love my Abstract collection made with Slovakian Crystal from Julianna Glassware. You can google search them or find Anna from Julianna Glassware online on Instagram or Twitter @Julianna_Glassware. She lives in Canada but can ship almost anywhere. Now if you are drinking the 3 Liter Wines for $10.99 first of all the glassware won’t make the wine taste any different and I am sure you are not budgeted for Glassware 3 times the cost of your wine but for a $21.99 of well made Bordeaux it is well worth the investment.

The wine is about as dark red in the glass almost black as you can see. Classic Left Bank Bordeaux aromas of cedar wood, camphor, earth and black fruits. On my palate it is a medium but a big mouth feel (13%ABV) of black plum, black currant, black cherry ending with a decent tannic briary or forest floor grippy finish and some hints of toast from the oak. It does drop off on the finish a bit quick. My first impressions after the first glass were… “Once Again Les Grand Chenes over delivers for the money.” I have had a lot of Bordeaux from this slightly sketchy vintage 2012 and I can see why this one of Bernard Magrez’s properties is a Cru Bourgeois. It’s a solid 87 Points out of 100 for those with a scorecard of my reviews. This would pair well with a Duck Breast grilled Medium Rare, Beef, Pork Loin or Lamb but I could see it with a simple Roast Chicken as well. I enjoyed it with just Salami and Aged Cheese on New Year’s Day.

First remember this is not Chateau Margeaux but it also isn’t $800 per bottle nor does it need 15-35 years of laying in a cellar before it becomes approachable. This is ready to drink now and that’s what most average Wine Consumers want or it could age 7-10 years with that Tannic Structure if you want to buy a few bottles or case to lay down. What a better than great introduction to the world of Bordeaux for a beginner or someone looking for Value. The big plus is what a Social Media Star you can be to your friends and family when your news feed says you are not just drinking an everyday Bordeaux but You Are drinking a Cruuuuuuuu BurzhWahhhhhh.