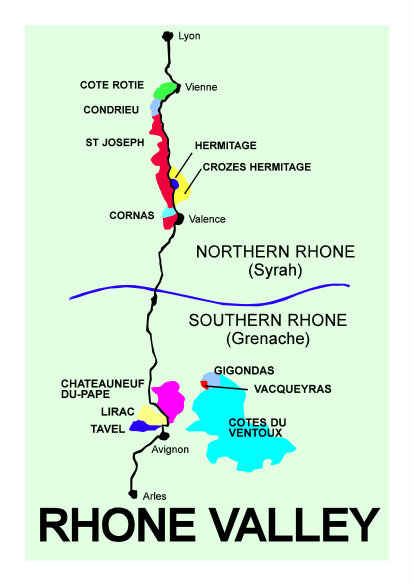 We have talked about being a “RHONE RANGER” in previous blogs. I am proud to say I am one. I love the Grape Varietals of the Rhone, Red and White. I still get perplexed when Wine Retailers are carrying less and less Syrah as they say customers don’t want Syrah as well as customers who tell me they love a “Big, Robust, Bold Red Wine” But dislike Syrah. I think a lot of that pre determined dislike is due to mainly Australia and California who produces an entirely different expression of the grape that a Big Bold Cabernet drinker wouldn’t like. Washington State especially Walla Walla and Red Mountain, produces some of the best Syrahs in the world. Still they are a close Second to the Northern Rhone. Above is a map of the Rhone Valley in France along the Rhone River. In the Southern Rhone it is all about Grenache but in the Northern Rhone, you can see on the Red Wines it is all about Syrah. Only two villages are on the other side of the Rhone River, Hermitage and Crozes-Hermitage. Every other village is on the Left Bank of the River. My totally favorite Syrahs come from the Village of CORNAS near St. Joseph (Which ain’t nothing to laugh about either).

A Little About Cornas

Cornas is Celtic for “burnt earth” (And you taste that in their Syrahs) ! The first written sources mention wine in the region as early as the year 885. Louis XV is said to have been an admirer of the wine from that area. Cornas became an official appellation in 1938 although it was not until 1950 that the first local producers began bottling the wine themselves. Terroir we are talking ROCKS and ROCKS And ROCKS and GRANITE and GRANITE and it is not an easy Terrior to grow grapes in but boy are the fruits of the labor of the winemakers in that area sure worth the work they put into it.

The Durand brothers, Eric and Joël, joined forces in 1996 to devote the polycultural family business to the cultivation of grapes. The Domaine is based in Châteaubourg in the Ardèche and covers twenty hectares, with Syrah, Marsanne and Roussanne farmed over the appellations of Cornas, St Peray and St Joseph. Domaine Durand also known as GAEC du Lautaret is a force to be reckoned with in the Northern Rhone for wines that age and wines that can also be enjoyed now. So far, I have never had a bad wine from these Brothers. 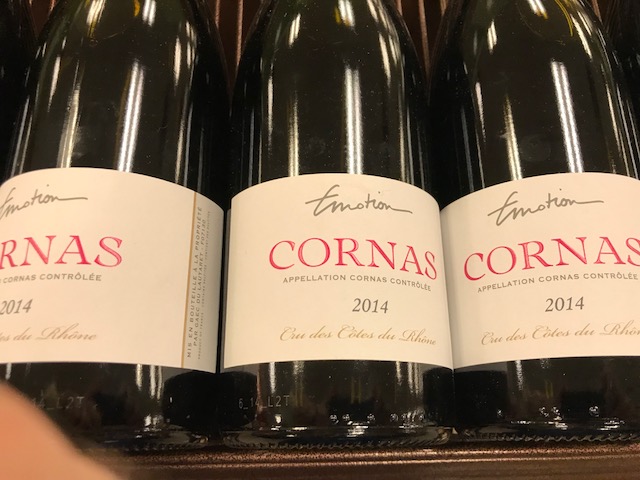 Cornas first of all is always 100% Syrah. I know that Malbec from Cahors in Southern France is nicknamed “The Black Wine” but Syrah from Cornas is a close runner up. Totally Black in the glass with only tinges of purple hues on the edge when tilting the glass. DO NOT ATTEMPT DRINKING till 2 HOURS of Decanting. This is serious stuff that is very young and can last 50 years but with a little patience, it will reward you. The only way I can describe the nose is to take ripe plums, ripe blackberry and macerate them in Kirsch or Cherry Cordial. This wine would pair amazingly with Lamb Chops or Leg of Lamb but you can skip all that and the calories and fat because the nose is shooting out with Game and Lamb bouquet as well as smoking cedar planks on a bbq grill. On the palate the structured acidity brings out the deep dark black fruits all on a solid frame of scorched earth (Cornas is Celtic for Burnt Earth…Good Choice of Names) almost charcoal like and finishing with black pepper spice and tingling minerality as the Tar Like flavors intensitfy not decrease after you swallow. Wine Spectator awarded the 2014 Emotion Cornas 93 Points but after evaluating the wine over a 2 day period I will go 95 as this is a beauty. I can’t find too many faults if any in the wine.

This is serious stuff and not an everyday drinking wine for most at $34.99 but a great value compared to what I see Napa Drinkers shell out in the $80 Range that isn’t as big and bold and structured like this. If you hunt.. go out find a Bear or Elk and harvest that thing as this is the time to bring out the Game, The Marbled Steaks and for Lamb Lovers like Me it needs MEAT. Shout out to friend and fellow Blogger Duane Pemberton who goes as @WineFoot on Twitter and Instagram, who recently got involved with a conversation with someone on Social Media that he can’t see how anyone could be a Master Sommelier who was Vegan nor would he trust a recommendation from a Sommelier that was Vegan.  I have to agree with him. Yes, you can eat whatever you want or fast or be Pescatarian or Vegan but how on earth are you going to be able to pass a blind tasting or recommend a wine like this that has big time aromas and flavors of Lamb and Game and Roasted Meats if you eat Tofu and Quinoa? You can’t have a developed palate to pick those flavors out of some of these type of wines if at one point in your life you didn’t at least try these foods. So if you are a carnivore don’t be shy about doing Rosemary Crusted Lamb Rack or Splurging for the Prime Rib Roast or Venison, Squab, Crispy Skin Duck, Elk, because this is the pairing for this type of wine. I urge you if you are hating on Syrah to let me prove my point …”You haven’t had a Good One Yet”… 2014 Emotion will change your mind.

2 thoughts on “If You Don’t Like Syrah..You Haven’t Had A Good One Yet!”