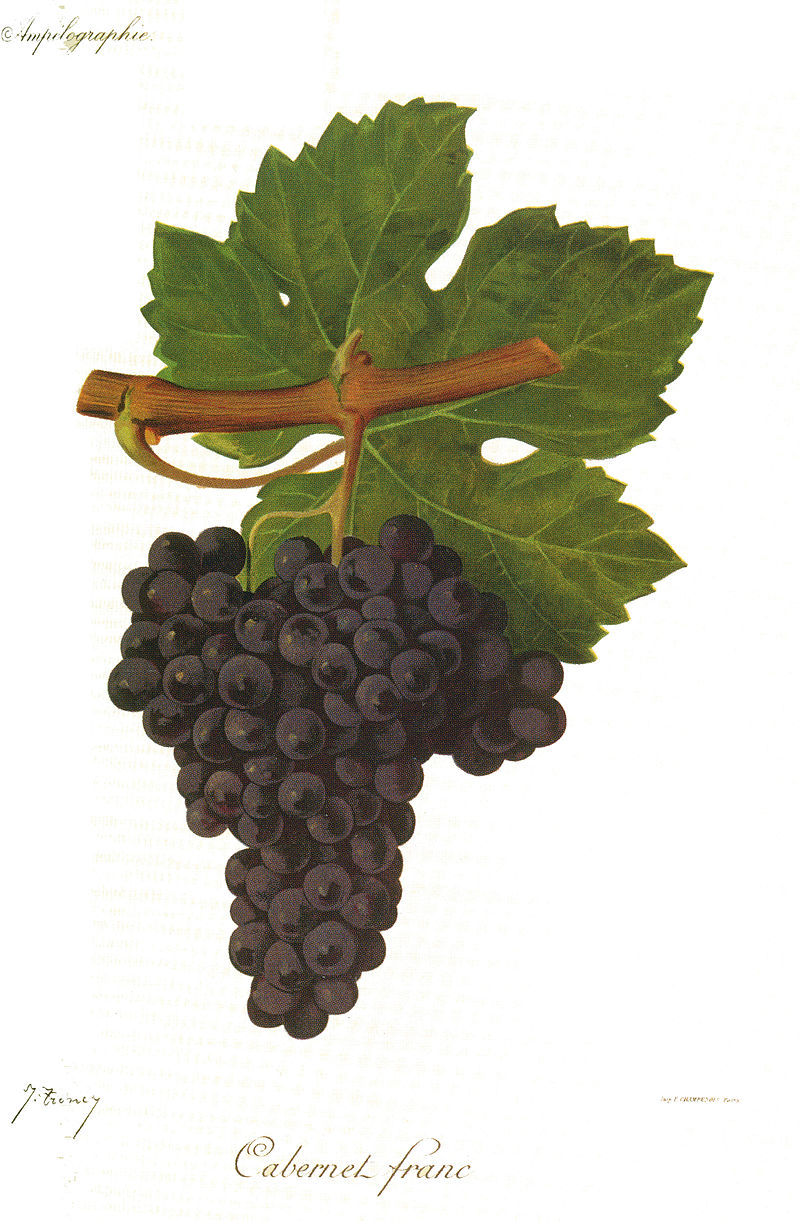 One Of The Parents Of Cabernet Sauvignon

Cabernet Franc crossbred with Sauvignon Blanc is how we have the popular grape varietal Cabernet Sauvignon. It is one of the principle Black Grapes used in wines worldwide and one of the 5 Red Grapes used to blend in Bordeaux. Most “Right Bank” Bordeauxs from Saint Emilion as an example,are going to be Merlot blended with Cabernet Franc. It is also well known in the Loire Valley of France in Chinon for example for being a single varietal wine. By textbook, it has aromas and flavors of cassis, raspberry, BELL PEPPERS, violets, tobacco and some sweet spices. I have some wine friends Lori and Michael in California who just released their very own Cabernet Franc under their label  “Dracaena Wines” (DRUH-SEE-NUH)  and they even started an annual event with a hashtag #CabFrancDay . I hear it’s pretty darn good and will review a bottle in an upcoming blog butttttt… of course as soon as ABC Fine Wine & Spirits where I am employed brought in a Cabernet Franc from……….. yes Washington State, I had to review it on the blog.

I recently reviewed The ADVOCATE from The Browne Family Winery which is a great 2014 Red Blend that is flying off the shelves and this is a 90% Cabernet Franc (Only 75% Required by law) and 10% Merlot. I believe that in order of wines that my personal favorite wine producing region in the world produces in order ,it would be 1-Syrah, 2- Cabernet Franc 3- Petit Verdot and 4-Merlot and Blends of all of them. I was curious to see how close this would be to the textbook Cab Franc of The Loire Valley In France. 23 Months Aged, Native Yeasts, 100% Malolactic (Gets the Tart Acids out) and only 464 Cases Produced. Only one way to find out and that’s open and taste. 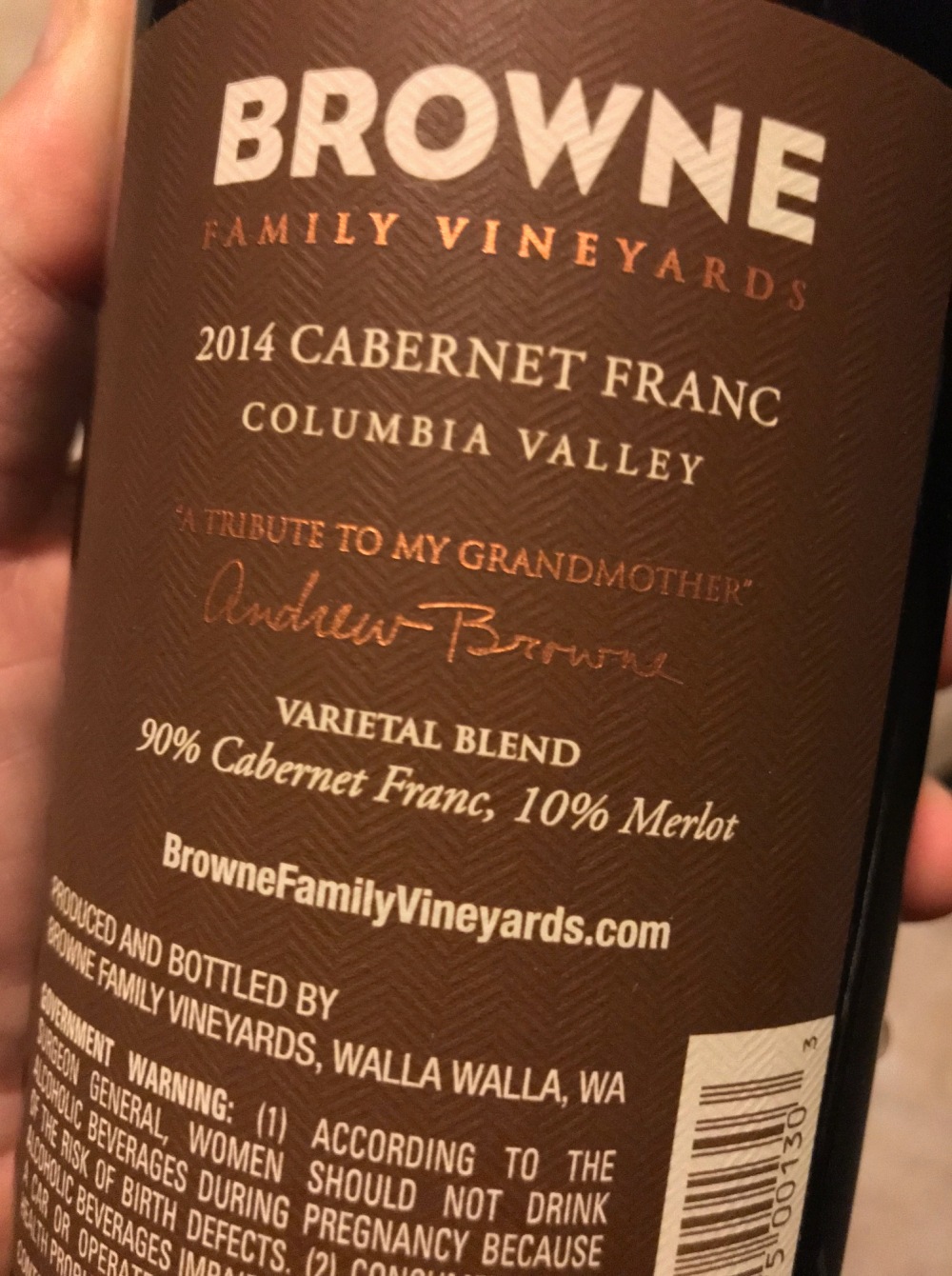 John Freeman is the winemaker who also made The Advocate. 2014 was a very hot vintage even more so than 2013. As soon as the wine opened up it was “Classic Loire” with a new world nose of being from Washington. Red Plums, Raspberries, CHARRED BELL PEPPERS and Violets. On the palate it was medium bodied and not as full as The Advocate but almost identically confirming on my tongue, the flavors of the aromas I smelled. Almost a Cherry/Rhubarb combo, the Charred Bell Pepper was evident (Love those Veggies in my Red Wines especially Cab Franc) and a very persistent, intense finish with savory spices and soft tannins.

ABC is retailing this Cab Franc for $29.99. I know we have one or two Direct To You Cabernet Francs from California that are in the $35-55 Price Range. We also have some Loire Valley Cab Francs entry level for $12 but this baby is in a whole different league. I had it with some Goat Gouda and it paired well but this was screaming for a Flank Steak or anything with Sauteed  Onions and Peppers on top. It may sound like I am biased but I promise you I am not. I have never been within 1,000 miles of Washington State and if I tasted this wine against other Cabernet Francs from all over the world (Believe me when I worked for Restaurants , distributors would put paper bags over 5-6 wines and make me blind taste) I would easily pick this out as my favorite expression of the grape. The 2013 was reviewed by Wine Spectator and awarded 90 Points and I would have to say this 2014 is 91 Points for less rough edges.  If you are a Cabernet Sauvignon Fan, I strongly suggest you taste one of the parents of that grape. It provides a great quality to price ratio.