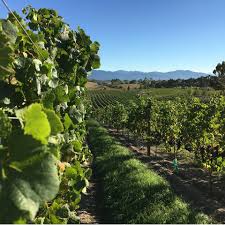 The perfect conditions for the finicky grape Pinot Noir is on the South Islands of New Zealand yet  most consumers equate NZ with is Sauvignon Blanc. It’s a little darker in color than Oregon Pinots but they don’ blend there and they have similar flavor profiles and as you can see by the Vineyards up above a pretty nice layout.

Do You Know Who Jules Taylor Is??

Every time I see someone with a bottle of Jules Taylor Sauvignon Blanc, I remark to them, I see you are a long time Kim Crawford Fan!!. They look at me like I am crazy. Remember there was a period of time where Kim Crawford was winning one of the top 10 wines of the year on Wine Spectator’s  Top 100 Wines of the year? They were winning year after year after year. Who made those famous wines so well rated? None other than a LADY (Kim is a Guy, Jules is a Woman) Jules Taylor.

Strong women role models are not particularly myriad in the US wine business. More female winemakers have emerged in the past 20 years but they have a long way to go before they dominate. It happens more across the oceans than where the Women’s Sufferage Movement began.

Jules Taylor started making wines eleven years ago and in 2000, was appointed winemaker at Kim Crawford. After the winery was sold to Constellation Brands in 2008, she decided to go her own way. She now concentrates on her namesake brand’s Sauvignon Blanc, Pinot Noir and Pinot Gris that she’s been producing since 2001 but in small, unreachable amounts. That has now changed as production grew.

Jules focuses on single blocks of ultra-premium Marlborough fruit in order to express the elegant terroir of this prized growing region in New Zealand. While Jules owns no acreage, she has exclusive contracts with growers who farm to her specifications and she regularly visits the vineyards in the months leading to harvest to check on the fruit. Jules divides her time between the enjoyable rigor of winemaking while spending time with her husband and partner George Elworthy, raising the couple’s two children, Lui and Nico, and enjoying the numerous athletic opportunities afforded in the Marlborough region. So let’s take a look at the ORIGINAL Kim Crawford Winemaker’s own label Pinot Noir. 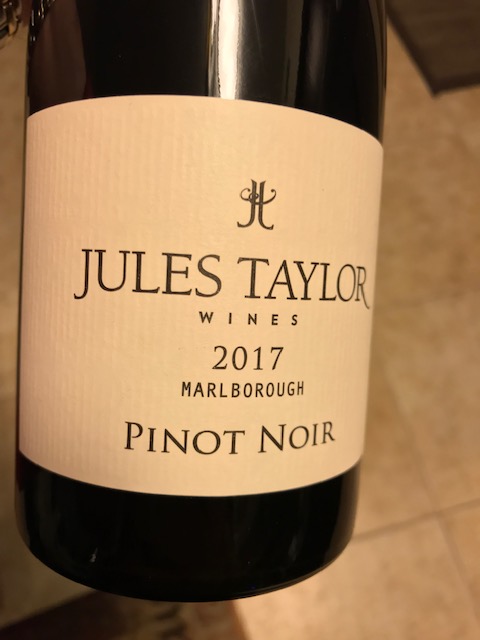 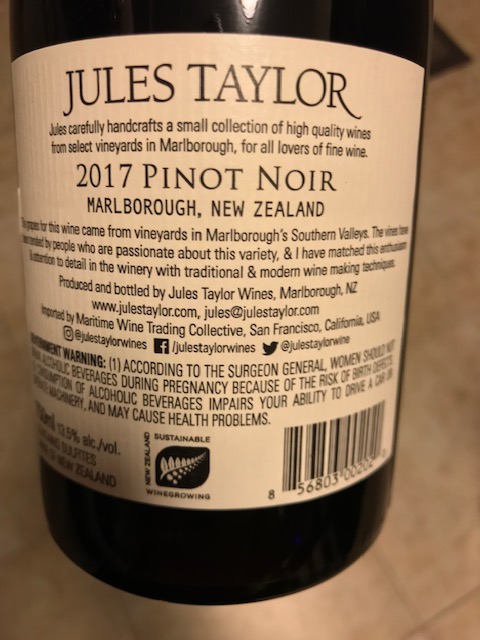 2017/ It was an average dry winter, bud-burst started well with very few frosts and a fairly even push. Flowering was cooler at the start of the period, but warmed up nicely, due to these good flowering conditions, berry set was very even. A number of rain events meant the season was running late, but the period after veraison was followed by some warmer sunnier weather in the new year leading up to harvest. The Pinot was harvested early April (remember this is opposite seasons in NZ as USA as they are in the Southern Hemisphere ) with the smallest berries at the Wrekin vineyard being harvested first. There is a lot of vigor and variation in the fruit due to the hilly nature of the blocks these were grown, and results in a broader flavor profile

The grapes for this Pinot Noir were grown in Marlborough’s Omaka, Southern and Brancott Valleys, by five local grape farmers passionate about the variety. The fruit was harvested by hand and machine over a four week period from late March when optimum ripeness was reached in each block. At the winery they used a combination of traditional and modern winemaking techniques in order to incorporate the benefits of both approaches. The fruit was de-stemmed into small open top fermenters and cold soaked for between 5 and 10 days, then fermented completely using indigenous yeast. Hand plunging during fermentation ensured a good extraction of color and tannins. Portions of the blend remained on skins post fermentation, while others were pressed at dryness before being transferred to a combination of French oak barrels and stainless steel for maturation. The wine was bottled in March of 2018. They have used screw caps to seal this wine to ensure it arrives To you looking and tasting just how Jules intended it to. The wine has .7 grams of Residual Sugar per liter with a perfect acidity level and PH balance. In my book that is a DRY Red Wine not a Sugar Bomb.  Let’s Review 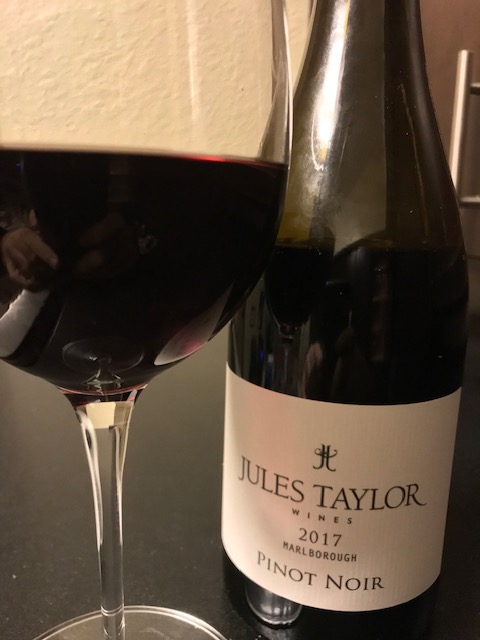 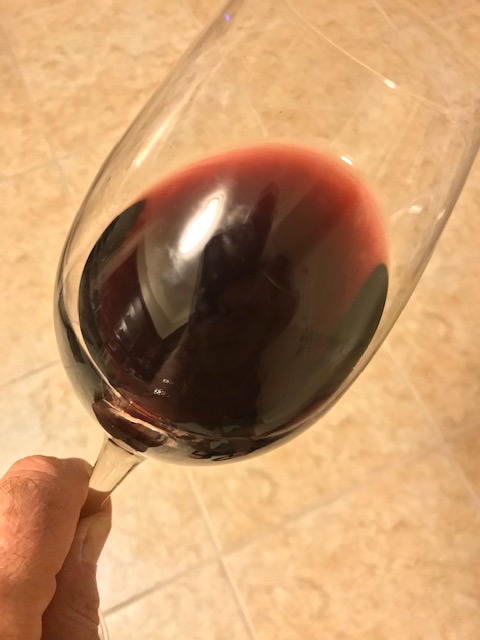 One hour of aeration and a slight chill in my fridge as usual before I review. Appearance wise a beautiful star bright ruby and darker in the center than most Oregon Pinots but I assure you this is 100% Pinot Noir with no blending. Medium Bodied at 13% ABV. When the nose finally opens I got Smoky plums, black cherry and raspberry with a hint of Twizzlers similar to many Oregon Pinots. On the palate a very juicy focused style with that .7 gram of residual sugar per liter needed as it has bright acidity with a mouth full of cranberry, tart cherry, pomegranate  as it glides towards the finish when the oak finally shows ever so lightly with some cinnamon spice, chewy tannins and a mouthwatering ending that invites another sip. This would be so amazing with New Zealand Rack of Lamb (Some of the finest lamb in the world), but even work with fatty fish, chicken dishes and I had it with some real greek feta made with goat and sheep’s milk and the pairing worked perfectly.  I hate to keep drawing the Oregon Comparison but I can’t help but think this New Zealand Pinot almost was the twin sister to Carlton Cellars Seven Devils 2017 Yamhill Carlton Pinot Noir from Oregon. Very much the same in style. I will go  a solid 90 points out of 100 and the wine was well received by Wine Advocate with a 91 pointts from them and a 90 from Wine Enthusiast as well. For long time Kim Crawford fans back in 2000 this will bring back some welcomed memories.

I think all TRUE Pinotphiles are always looking to get the most Burgundian Style 100% Pinots for the best price. This wine is certainly within that range selling for a retail price of under $20 per bottle and it is handcrafted wines like everything coming from this wonderful winemaker. I love her Pinot Gris, Gruner Veltliner, Chardonnay as well and we all know her Sauvignon Blanc may be the best on the market today. Her wines are made with talent and love but this Pinot Noir will make you want to seek out more REDS from New Zealand as there is a whole lot more than just Sauvignon Blanc…Jules Taylor has proven that to me! 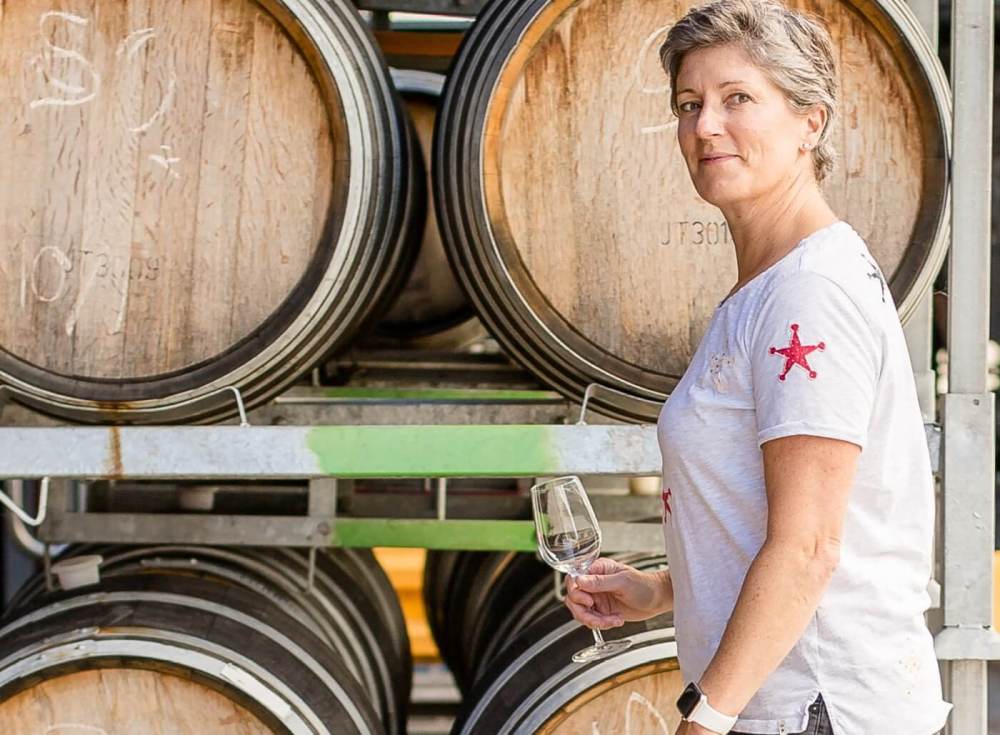