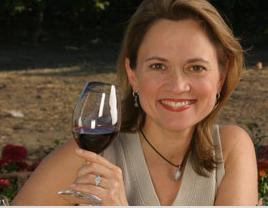 15 years ago, I was a Radio Personality/Comedy Writer. I hated wine. The only wine I would drink to be social was Kendall Jackson Chardonnay, and I’d really go big on New Year’s Eve with Andre Cold Duck. I always loved to cook since I was 12 years old and I was always fascinated by TV Cooking shows like Julia Child’s “The French Chef” and Graham Kerr “The Galloping Gourmet”. I don’t remember if it was on Public Television or The early days of the Food Network that I came across a show about Wine with a host named Andrea Immer. I just thought she was some wine loving woman who looked good on camera and had a wine show. Little did I know that Andrea Immer was a Certified Master Sommelier. There are 118 professionals who hold the title Master Sommelier in North America and the CMS Americas. Of those 101 are men and 17 are women. There are 160 professionals worldwide who have earned the title Master Sommelier since the first Master Sommelier Diploma Exam. I was shopping at a Barnes and Noble Bookstore and I always used to gravitate towards the cookbook section and I came across this:

I had to buy it. I was a Head Bartender at a Fine Dining Hotel Restaurant and I didn’t know Jack about Wine. I also figured out quite quickly that I could double my income in Tip money if I could learn about Wine except that all these so called Sommeliers the Wine Distributors or Corporate Restaurants would send to train us on wine were so boring and so snooty that you learned nothing more about wine only about the Trainer’s Awards and Background. I finished Andrea’s Book in 2 days. The title “Great Wines Made SIMPLE” was the appropriate title. After reading Andrea’s Biography not only is she a Master Sommelier but she was named the first woman Cellarmaster for Windows on the World in the World Trade Center in 1992, and in 1996, reopened the restaurant as Beverage Director. Andrea counts the most significant years of her wine career in service to the Windows family of employees and guests. In 1996 Andrea was awarded the title of Master Sommelier from the Court of Master Sommeliers. In April 1997 she competed for and won the Sommelier Society of America’s ‘Best Sommelier in the United States title! I could not believe that this woman was the same Andrea Immer that taught me more about Wine in 2 days of reading her book than all the Experts these Restaurants would send to Train Servers and Bartenders. Not only did I learn so much about Wine from Andrea’s book she lit a fire under me to explore drinking wines. Goodbye Andre’s Cold Duck, Hello Champagne and Prosseco and Goodbye Kendall Jackson Chardonnay and Hello White Burgundy and a Plethora of Red Wines that I never had heard of before. I now knew what I wanted to be when I grew up lol! I wanted to follow in Andrea’s Footsteps, use my personality and comedy writing from the Radio Days and become the Male version of Andrea Immer. I enrolled in every course I could take at Johnson and Wales in Miami, The French Culinary Academy in New York to study for my exams to become a Certified Sommelier with the Court Of Master Sommeliers. After I passed my Level One and got my certificate, I applied for a job at the newly remodeled Westin Diplomat Hotel in Hollywood Florida owned by Starwood Hotels, to be a Wine Steward in their Steakhouse called Hollywood Prime. I was hired on the spot. We went through the usual Restaurant Training but when it got to the Wine part they told the staff they would be teaching us Wine using an $11 million dollar video that Starwood Hotels produced to Train ALL their Hospitality Staff at their properties Worldwide. I thought, here we go again! Time to take a nap. Surprise!!! The host of the video was none other than Andrea Immer who was the first Corporate Director of Beverage Programs for Starwood Hotels & Resorts, Andrea oversaw the entire alcoholic and nonalcoholic beverage program for its North American hotels, including the Sheraton, Westin and W Hotels, and The Luxury Collection. She also launched its award-winning wine education program, lauded by USA Today and numerous trade publications as the most innovative and far-reaching in the industry. Just like her book, just like her appearances on TV, just like she speaks to the millions of guests when presenting wine at a Restaurant, she doesn’t speak like any other Master Sommelier she speaks in an ANDREA IMMER Language that makes wine easy for everyone to understand. Andrea even put together a Wine Program for Target Stores and The Olive Garden. Neither of those wine lists were Wine Spectator Award of Excellence nominees but what they were IMMER-IZED….Great Wines made Simple!

For those of you who know me or have met me, I have gone on to become a Level 2 Certified Sommelier and I have worked in every aspect of the Wine Industry from Selling Wine for Southern Wine and Spirits, Retail Shops, to being a Sommelier/Beverage Director at Hotels, Wine Bars and Restaurants and now known as Larry “The Wine Guy”. Not too shabby for a guy who hated red wine and drank Cold Duck on New Year’s Eve. I think in life, everyone needs a Mentor to ignite that spark that gets you excited about a subject. Andrea Immer Robinson is that Mentor to me. One Final note to prove my point. I am on Twitter as @LarryWineGuy I follow many of the Wine Industry’s biggest names from RobertParkerJr, Antonio Galloni, James Molesworth, James Suckling, Kevin Zraley, and of course Andrea Immer Robinson at @AndreaWine. I have made hundreds of attempts to respond to tweets to every single one of the above names and hundreds more and they get lost somewhere in Twitterville and they are TOO BIG to respond to a little ol’ not famous Sommelier like me. You guessed it, Andrea Immer responds to every single message I send her. You can imagine in your own lives trying to make contact with the person who inspired your career and actually getting a response.

You are the most influential person in my Wine Life Andrea and I believe the most infulential person in the Wine Community. I end every single Video on my blog with the closing being “WINE IS NOT FOR SNOBS, IT IS FOR EVERYDAY PEOPLE LIKE YOU AND ME” And the person who taught me that lesson Andrea Immer Robinson.